Tundish is an important metallurgical vessel in continuous casting process for distributing molten steel between ladle and mold, promoting the removal of non-metallic inclusions, and improving the surface and inner quality of castings consequently [1-6]. However, with casting proceeding, the temperature of molten steel will drop remarkably both in ladle and tundish due to heat loss, which will lead to a change of casting speed for smooth operation and the instability of fluid flow in the tundish and mold. To keep steady casting under a given constant temperature, the heating technology of molten steel by plasma gun or induction channel in tundish has been paid more and more attentions in the recent years. Under this situation, both the surface quality and a consistent inner quality can be expected to achieve for casting products. However, due to the installment of the induction heater, the effective volume of a tundish will deduce and the flowing characteristics of fluid will vary, compared with a conventional tundish.

A 7-strand tundish with symmetrical induction heating channel has been in service in a steel plant of China, which is used to produce high-quality bearing and spring steels. However, the industrial trails found that the non-metallic inclusions in the billets of strand2 and strand6 are more than other strands, which was suspected to be the results of irrational tundish structure when adopting the induction channel. Therefore, a structural optimization was conducted by us and an optimized case was provided based on the double-induction heater. Compared with the prototype structure, the dead zone volume fraction of the optimized case was decreased by 30.16 %, and the average residence time is prolonged by 278 s. To enlarge the effective volume of the tundish and increase the production efficiency, a single-induction heater is expected to adopt in this steel plant. Therefore, in the present work, the structure of this 7-strand tundish with single-induction heater will be optimized by physical model, and the flow characteristics and behaviors of fluid in it will be revealed, which is beneficial to the better application of this innovative vessel in industry.

Figure 1. Schematic of the tundish [8]

In industrial operation, when the molten steel flows across the induction channel, it will be heated. Different electric powers will generate various heating effects. To observe the effects of induction heating on the liquid flow, non-isothermal experiments with various temperature differences (

= 0, 5, 10, 20, 30 °C) of fluid were firstly performed for the prototype tundish with single-induction heater ( 5º of channel inclination upwards, 300mm from the channel export to tundish bottom surface). The structural schematic is shown in Figure 2. Adopting the ambient temperature water to model the molten steel without heated outside the channel, various temperatures of hot water was injected from the channel inlet. The experimental scheme is listed in Table 1.

Table 1. Scheme of the non-isothermal experiment.

The characteristic parameters of fluid for different cases are shown in Table 2, and the RTD curves are illustrated in Figure 3. 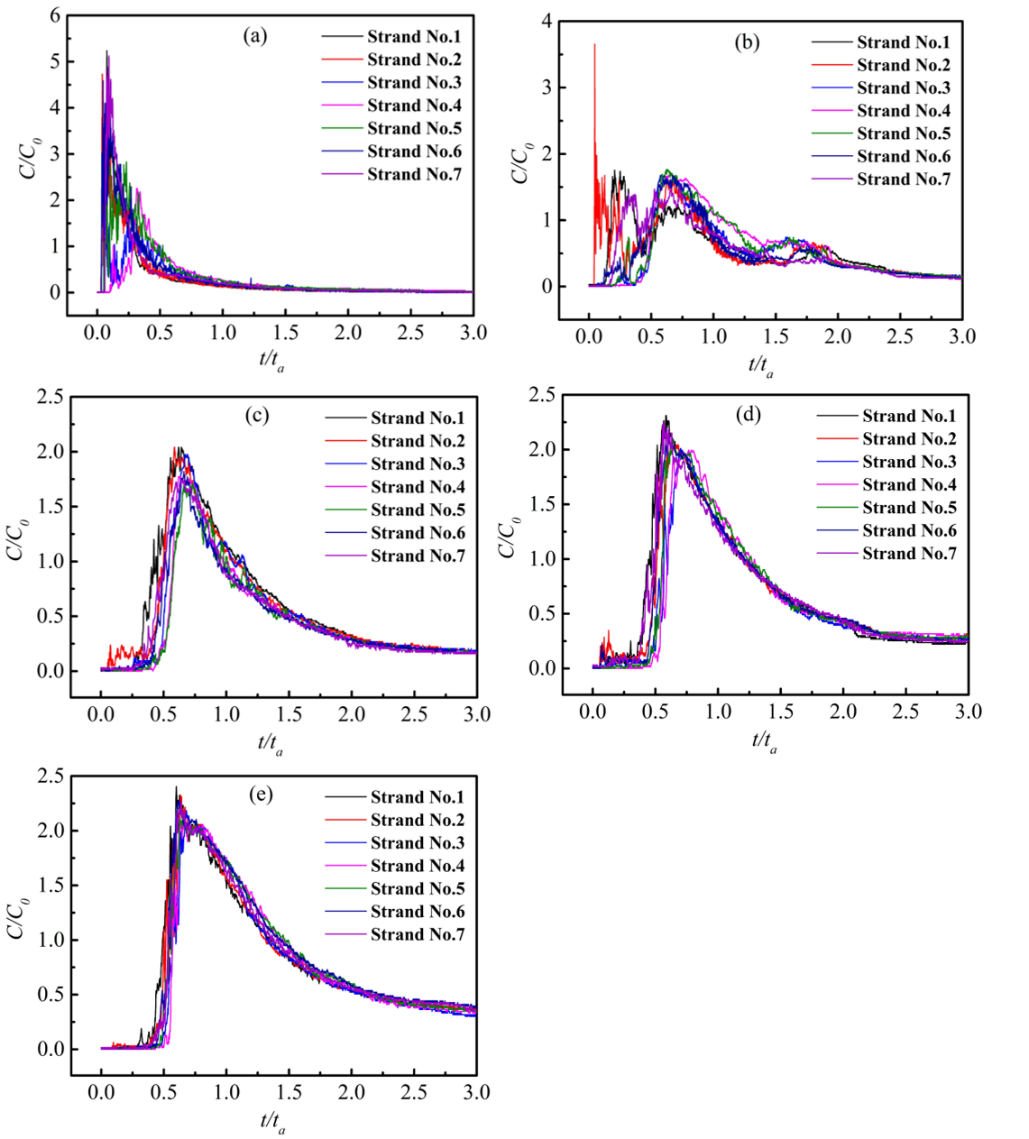 is only 35 s, the dead volume fraction reaches 54.58 %, meaning that a half fluid of the tundish flows slowly. The reason can be explained by the RTD curves of Figure 3(a) as follows: the peak concentrations C/C0 of strands 2 and 6 in case P0 both exceed 5.0, and show sharp shapes, which suggests that most tracer directly flows to outlet2 and outlet6, forming “short-circuiting flow”. Comparing case P0 with the prototype double-induction heater case A0 from the reference [8], the dead zone

of the former, and the standard deviations

are all larger than the latter, indicating that no matter the prototype double-induction heater or single-induction heater, their flow fields are both irrational under the condition without temperature difference.

of the 2nd strand is 44 s. Also, there is a big difference among the RTD curves of different strands. However, the dead zone fraction of the whole tundish is only 3.66 %, much smaller than case P0. With the increase in temperature difference, the minimum break time and peak time of cases P2 to P4 are obviously extended and the dead zone disappears.

Comparing cases P1 through P4, the RTD curves of seven strands become more consistent with the increase in

, and the standard deviations (S) in Table 2 are generally decreasing.

To explain the above phenomena, the ink trajectory of cases P0 and P3 was illustrated in Figures 4 and 5, respectively. 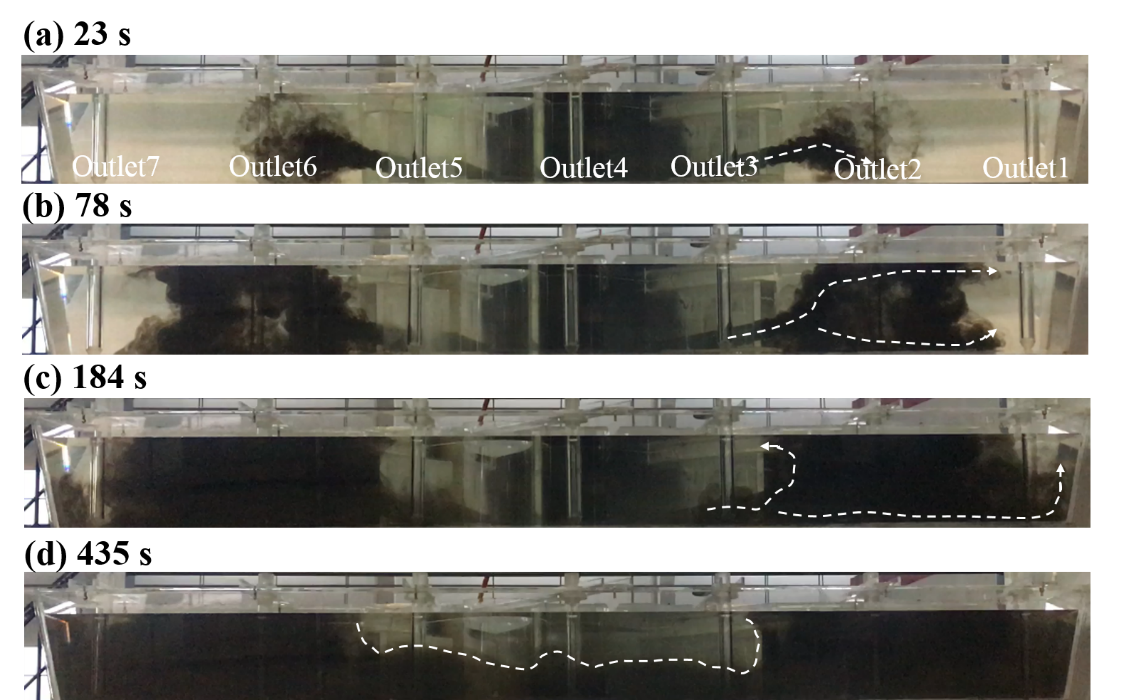 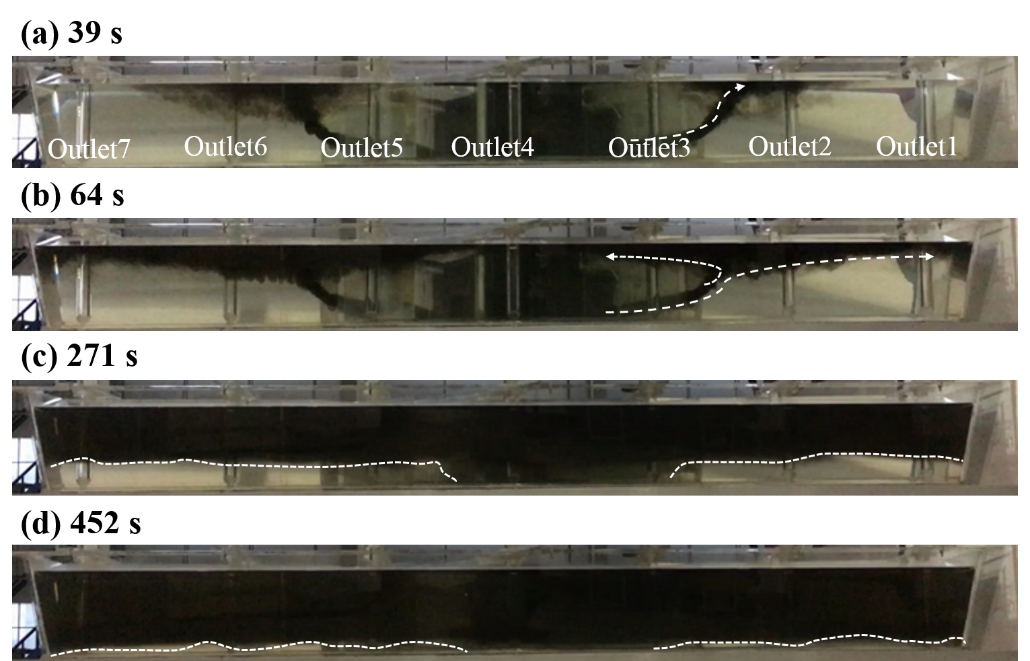 For case P0, the black ink first flows along the tilted channel (Figures 4a). At 78 s, some ink disperses to the bath surface, while the other directly flows to outlet2, forming “short-circuiting flow”. In this situation, the non-metallic inclusions in this strand will not have enough time to float and remove. From Figures 4(c) and (d), ink could not almost flow to near outlet4, while the most concentrated on the both sides of the tundish, suggesting that the region near outlet4 is the main source of dead zone. From Table 2, the

reaches 54.58 %, accounting for more than a half of the tundish volume. In addition, the

respectively exhibit 122.40 and 101.94, which a big difference in the flow feature among different strands is indicated. Therefore, optimizing the inner structure of the prototype tundish with single-induction heater under the condition of

From Figure 5, the ink trajectory in case P3 is very distinct from case P0, it firstly flows to the bath surface with the hot water from channel (Figure 5 (a)) because of the thermal buoyancy, and then accumulates to the whole tundish surface (Figure 5 (b)), no short-circuiting flow generates in this case. After that, the hot flow gradually sinks to every outlet. As a long time is undergone from the surface to the bottom of the tundish, the residence time of liquid is greatly increased. In addition, the hot flow wholly sinks, thus the dead volume of this case disappears.

As was described in the reference [8], when the induction heating of tundish runs for a period of time, the temperature difference of molten steel inside and outside the induction channel will reduce until disappear. At that time, the molten steel in tundish will become isothermal flow. In addition, the induction heating operation is usually used for some special steel grades such as bearing and spring steels for economical consideration. For normal steel grades, the heating function of channels will not run. Under this situation, the flow of molten steel through the channel is also isothermal. Therefore, for the structural optimization of a tundish with single-induction heating, the isothermal experiment of water model is necessary.

Based on the results of double-induction heater [8], the case of single-induction heater is designed as follows: the induction channel are set as horizontal and is elevated to 340mm away from the bottom surface of the tundish, the two dams at each side of the tundish are symmetrically distributed between outlets, dam1 is at the position 375mm to outlet2, dam2 is at 240mm to outlet3. The heights of the dams are respectively arranged as 0, 340, 420 and 500 mm, and the experimental scheme is listed in Table 3. The flow characteristic parameters are presented in Table 4, and their RTD curves are shown in Figure 6.

Table 3. Scheme of the isothermal experiment 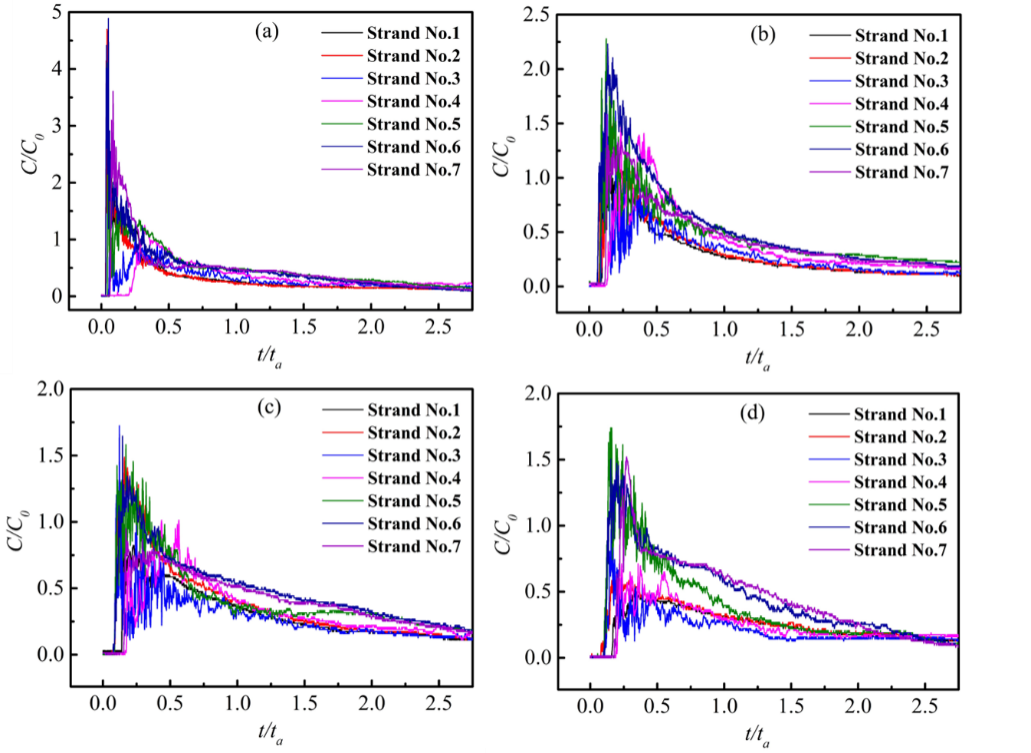 From Table 4, the average residence time of case G1 is increased by 292 s and the dead zone fraction is decreased by a half compared with case P0, indicating that the elevation of the induction channel is favorable for the improvement of flow field. However, the induction channel cannot be too high due to the limits of liquid surface of the tundish and the residence steel.

Comparing cases G2 through G4, the average residence time prolongs, and the dead zone fraction and peak concentration decrease with the increase in the dam height, suggesting that the high dam is beneficial to the optimization of flow field of this tundish. This is because that the fluid flows upwards rather than directly to oulet2 and outlet6 because of the guide of high dam. Under this situation, the short-circulating flowing is eliminated. The flowing parameters of case G3 is close to that of case G4, thus case G3 is believed to be optimal, considering the actual production and the amount of residual steel.

From RTD curves in Figure 6, the difference between various strands is relatively large as the set of single-induction heater makes the flow field asymmetric at the both sides of discharging chamber of the tundish.

Flow characteristics for an innovative casting tundish with channel-type single induction heater are revealed by water model method, based on isothermal and non-isothermal working conditions of tundish, and the optimal flow control design is put forward. The following conclusions are drawn:

Under the isothermal situation, the elevation of induction channel and the set of double dams in tundish can reduce the dead zone fraction, and the high dam has advantage over low dam. The dead zone fraction of cases G3 and G4 is decreased from 45.57 % in prototype tundish and 54.58 % in case P0 to below 16 %. Considering the height of liquid surface and the amount of residual steel in the tundish, case G3 (induction channel height 340mm, two dams height 420mm) can be considered as the optimal choice for an actual production.

It's not allowed to use this article in any forms, including reproduce or modify without the origional author's written authorization.

Zhongke Electric is committed to R&D and providing complete solution for electromagnetic metallurgy, as well as on-line heating system for continuous rolling.
Request With Online Form